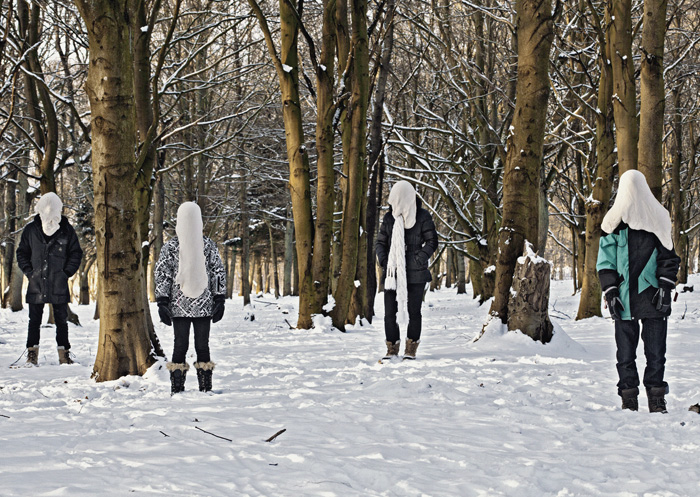 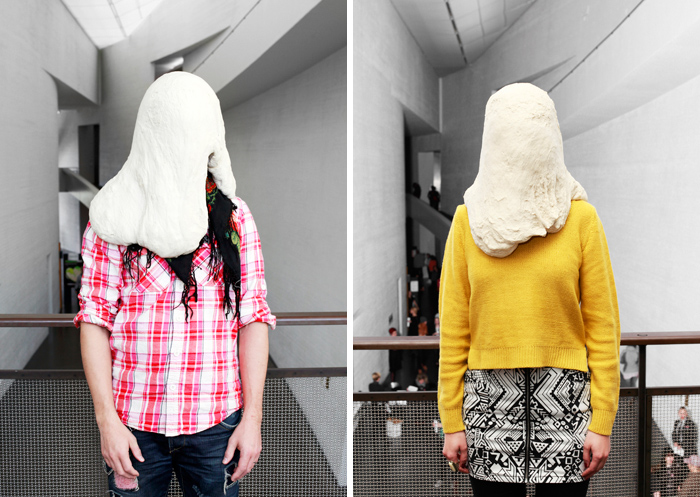 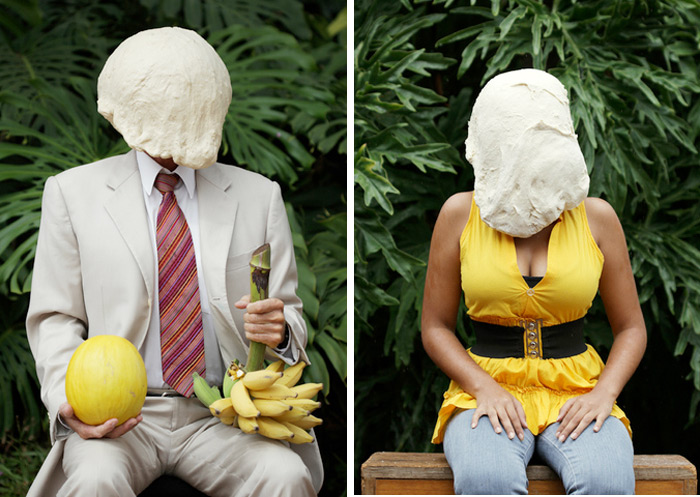 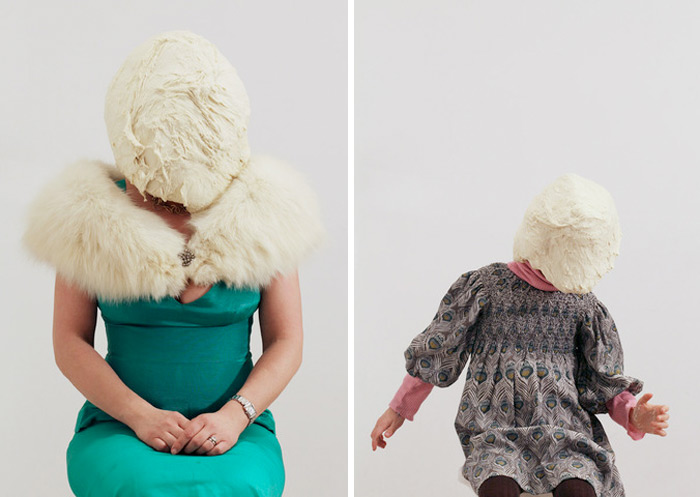 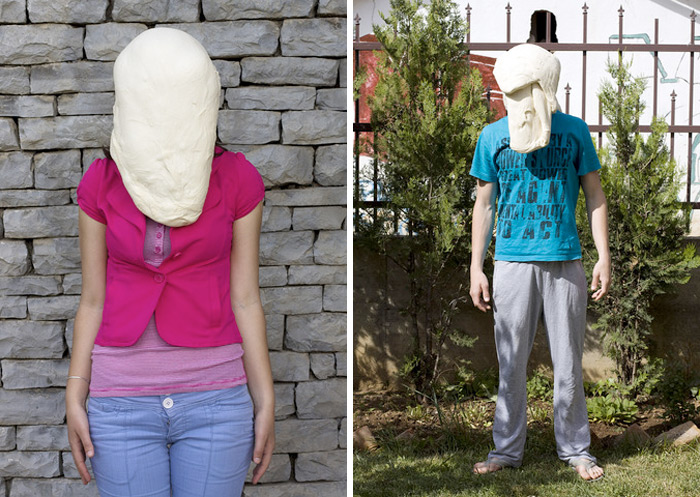 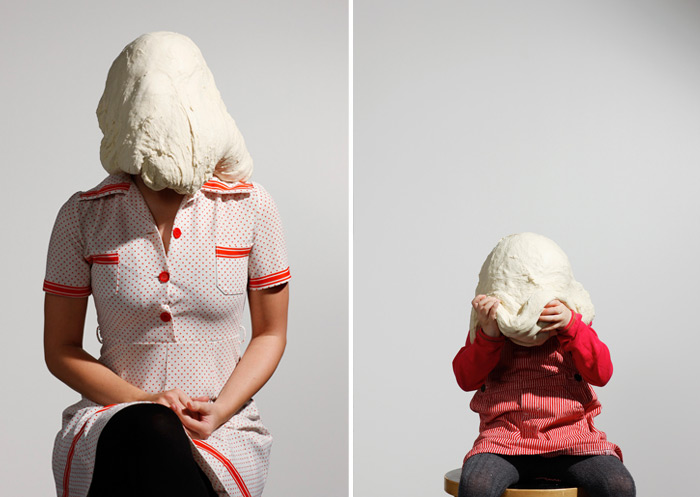 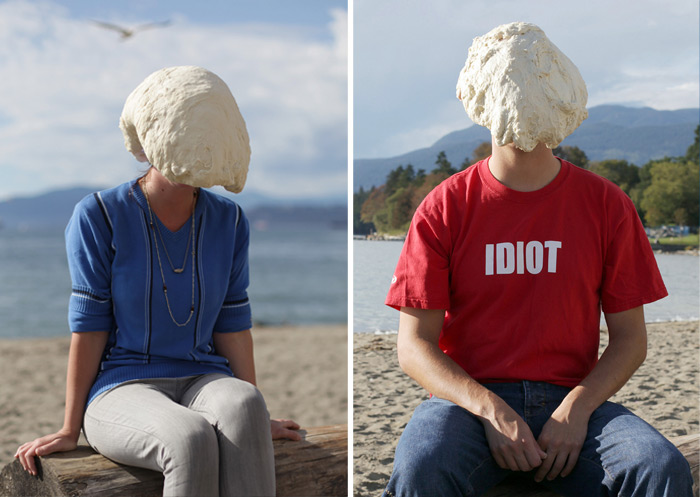 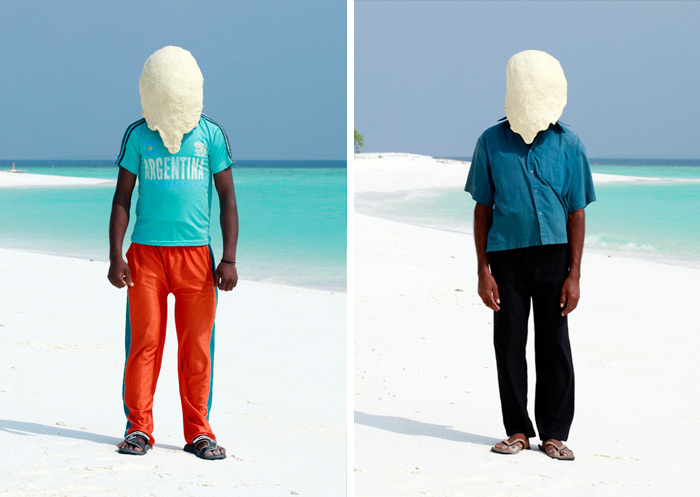 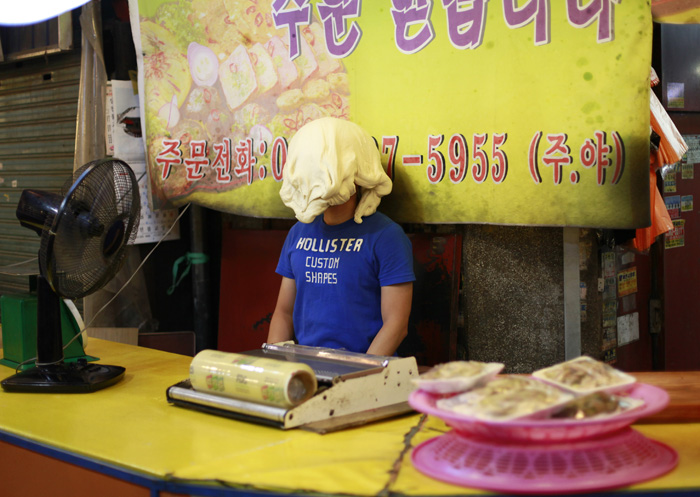 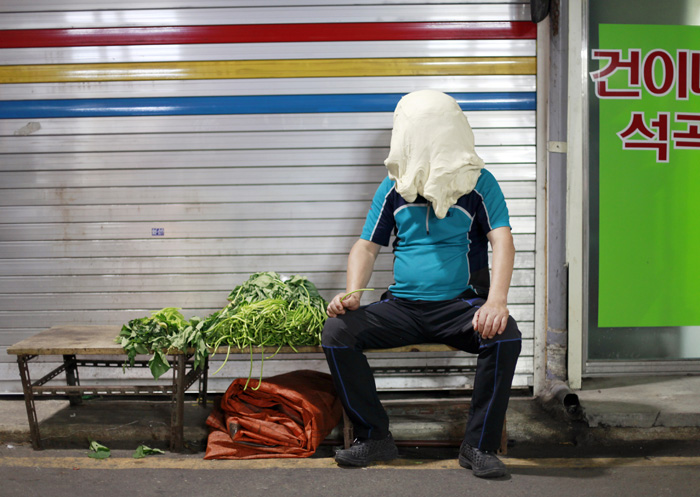 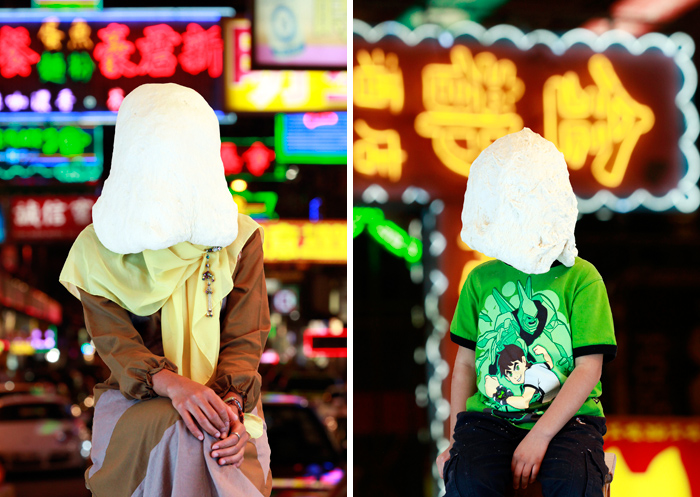 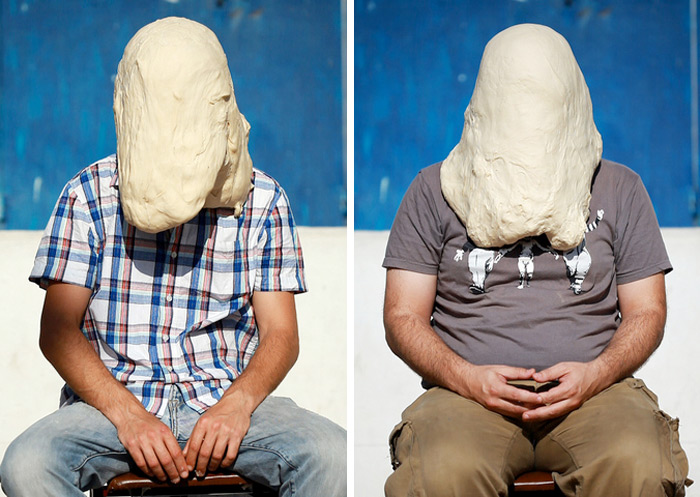 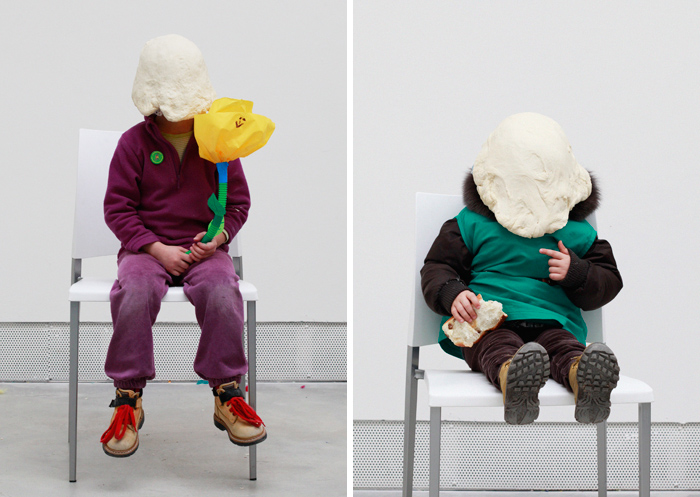 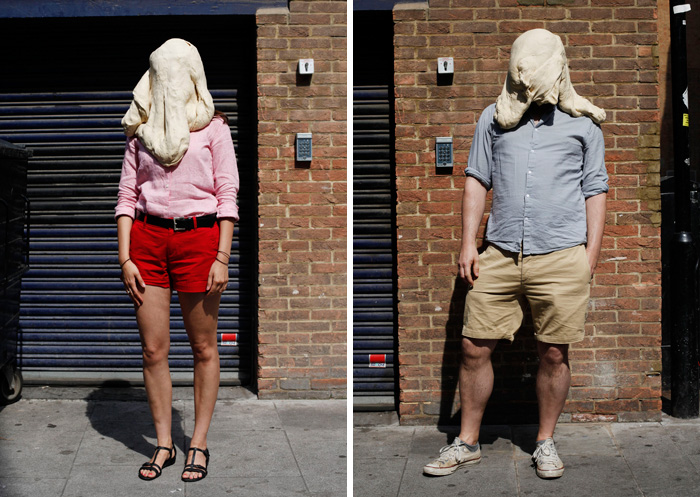 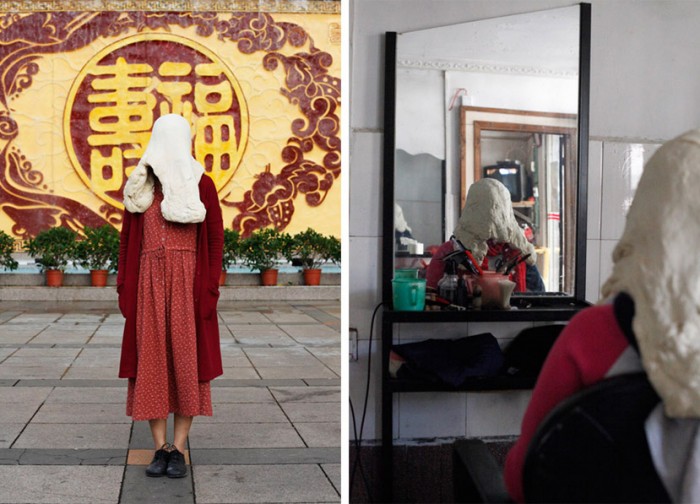 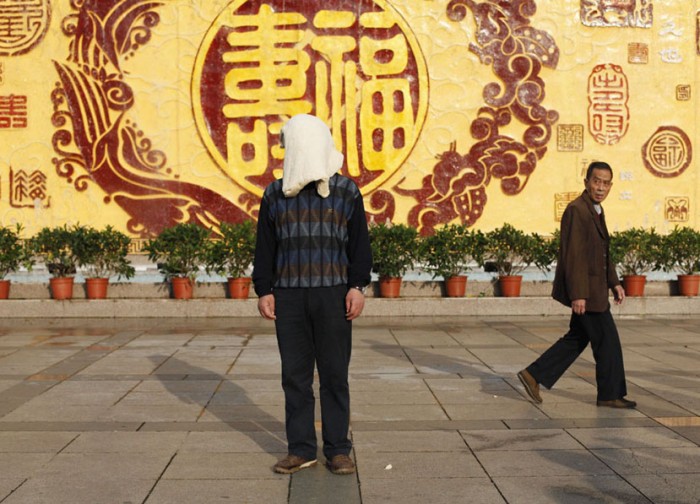 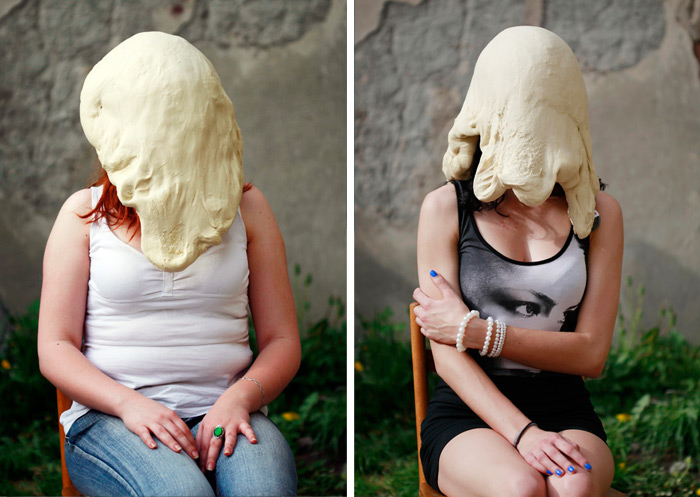 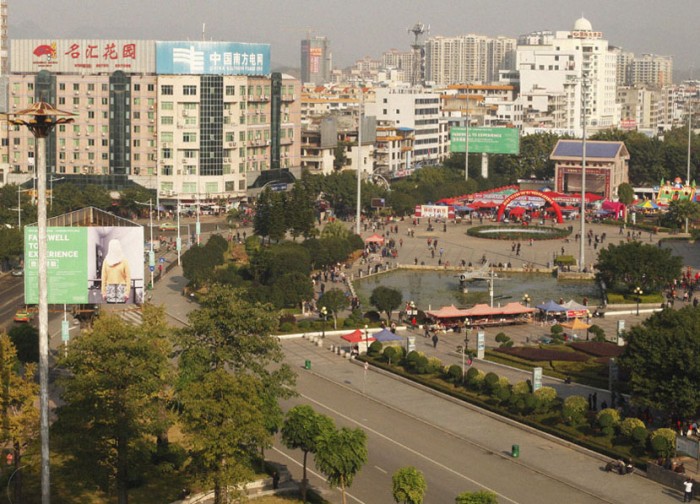 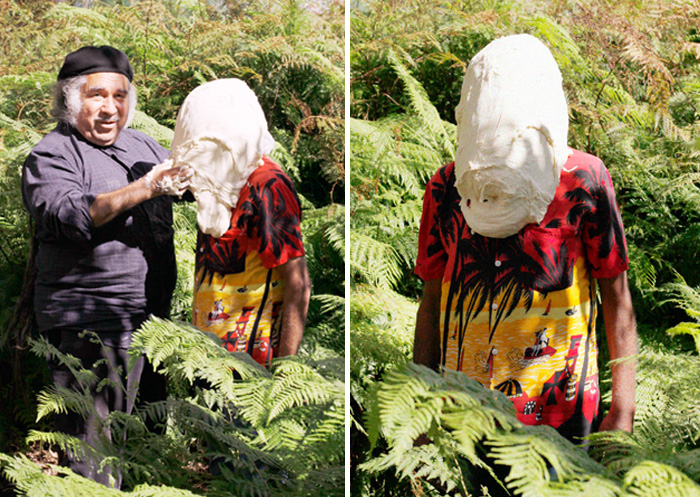 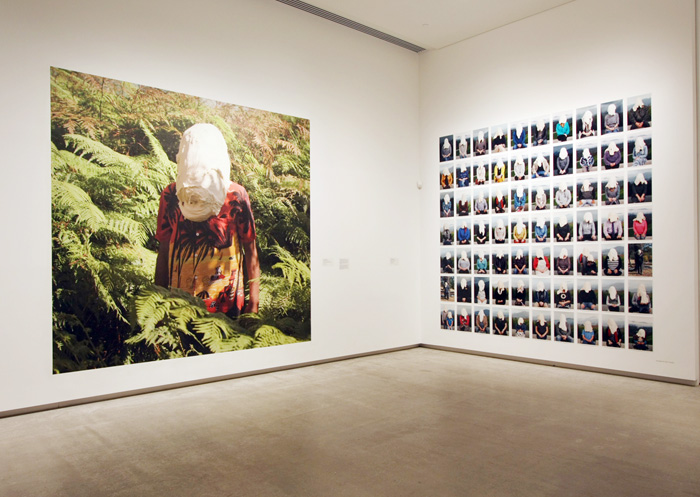 Images: A selection of Dough Portraits from the 7-year long photo project in 14 countries, 2008-15.

People were queuing to participate in the Dough Portrait photo event in the art labs at The National Gallery of Denmark March 8th, 2008.
Interview with Søren Dahlgaard by Malene Jorck Heide-Jørgensen for kopenhagen.dk

Lumps of 10 kg dough were lined up on tables alongside, waiting to be kneaded and moulded to shape the participant’s new identity. Before the spotlight, Søren Dahlgaard was ready with his camera waiting for his audience to enter the scene.
The Dough Portrait event was transmitted by both DR (Danish National Broadcasting) & TV2.
132 photographs, is now on show in the National Art Gallery and kopenhagen.dk interviewed Søren Dahlgaard at the opening of his show.

I have used dough as a sculptural material in many of my art projects since 1998. I wanted to make something that was new – something that involved the public and about identity.

I’ve heard a housewife say ‘what a waste of good dough’! When she saw your Dough portraits.

That is a very interesting comment; because the dough is wasted in a sense when you don’t bake it and eat it. Dough is a waste to put on the head since it is potential food. Dough is made from wheat and wheat grows on most of the fields in Denmark. If you fly over the country you will see that most of the land is fields with wheat growing on them, which you use for flour … dough is connected to land art in that way.
If you want to read the point of starvation and lack of food into the dough project perhaps then it is not a waste since it makes people think about it and it can start a debate. Here I have used dough as a material for an artwork and the artwork is communication. I am using 200 kilos of dough. It is one of the directions in this work.

The prices on flour have doubled recently.

Yeah, it’s crazy, before I paid 4 kr. a kilo and now I pay 8 kr. per kilo of dough.
It was in the news when the flour prizes doubled a few weeks ago on the same day I was interviewed on the radio show Go’ Morgen P3 about one of my Dough Warrior performances. It was a funny coincidence!

Some of the textural qualities are a bit like classic sculpture materials such as clay and plaster. I think dough has got such potential though. It is an absurd art material in terms of classical sculpture. The classical sculpture materials, clay, plaster, wood, marble, stone, and bronze can last for hundreds of years where the dough is only good for a few hours, half a day maximum and then you have to throw it out. My starting point is sculpture – a conceptual approach to sculpture – when I build things and direct a scene there is always a narrative, a story. The dough is my sculpture material. Photography and video become the main media to make the artwork last for more than the duration of the process or the performance.
You can say that the people in the Dough Portrait pictures transform into a sculpture for the duration the photo is captured.

I think the pictures look classic…in a rather bizarre way.

The Dough Portrait series is very much connected with the history of painting and classic portrait photography. Everyone has had their passport photo taken and has been photographed for the school yearbook.
In the old day’s artist were commissioned to do portraits of wealthy people, the king etc. and then later came landscape painting. The Dough Portrait photos relate to that history. And of course, the whole question of identity, because when the face turns into a sculpture material you get a new identity. Normally you will first look at people’s faces in portraits – but now when you look at the pictures people have this strange face made of dough – a familiar material in a strange context.
Dough is familiar in all cultures. Everybody eats bread. When two familiar things – the portrait photograph and a lump of dough – are put together it transforms into something new – it is simple and yet slightly bizarre. The dough on people’s faces is not dough anymore – it is part of their new identity. That’s the foundation of my entire art project, to transform familiar objects and tell new stories. It gives a twist – a new meaning to the idea of the portrait image.

People’s real identity, whatever that is, is disguised in dough.

A lot of our identity is in our face. The hands become so expressive in the image when the face is gone and the body language also comes into focus. That is also why I choose to frame the pictures the way I have done. First, the idea was to frame it like a passport photo, but then I realized that if you include the hands, the photo shows much more of the identity of that person it also becomes very painteresque when you can see some skin and the clothes folding.

You involve the audience – every portrait here is a photo of a person who voluntarily put 10-kilo dough on their face – the performative part is an important part of the project.

Each person selects a dough from a line of about 20 different lumps of dough. They touch it and then knead it and they get familiar with the texture – dough can be sticky and elastic – it varies very much and that’s one aspect, which makes it very interesting. People create a relationship with the dough. It’s cold and quite heavy and it is important that everybody put it on their own head themselves so they shape and mould the dough themselves. Yet the nature of the dough is also that it is moving – it is viscous. The action of putting the dough on the head will always create a different shape and expression.
When you put the dough on your head a shape is there straight away. The change of shape and coincidence and lack of control is what you have to deal with when dealing with dough. It can only be controlled at a certain moment and then the nature of the material takes over. The process is creative and the most important part – if you are prepared and open to changes you can make it into a new idea.
Photography is one way to capture work, which happens over time and video is another.

What reactions did you get from people who participated in the Dough Portraits?

Very different, some people just did it; no questions asked and others were laughing and talking about different things. Some people were struggling a bit with the dough if it was more sticky and heavy than expected, so some people were a bit surprised about that. It all went quite smooth though.

And it was the first “dough on their head” experience for all the participants.

Just before the dough gets too close to one’s nose and mouth and claustrophobia is the closest word to describe the situation you say “thank you” and the next person in the line comes into the spotlight.

I let the dough run down over people’s faces for a while, I would say ‘stay like that!’ and then take some more pictures so that I later in the selection process can choose the best image.
When the dough runs down your face and you keep it there for a while you can’t breathe in the end. Dough is very connected to the body – it feels like a soft belly. Dough with yeast is actually alive. It’s the only sculpture material, which is alive. That’s why I am still doing stuff with dough for all these years – it continues to be interesting to use in various contexts – it has got all these different qualities – I challenge the material and I challenge myself in all these experiments I do.
When I am looking at the Dough Portraits now the dough looks like marble. It could also be a plaster cast.

I just realized there was nobody wearing a uniform or a suit in this large photo series. Danes are often dressed very casual. The only brown person in the entire series of 135 portraits is my mother-in-law from the Maldives. If I did this project in another country the pictures would probably be quite different – the interactions would be different and the reactions and discussions would be different. It would be really interesting to do it in other cultures and countries.
The people participating in this collaboration become the artist themselves. I am the director, who defines the idea and I frame and record the image. The participants become artistic collaborators because they choose how to sit, the clothes they wear and they shape the dough on their head.