The Gnome Painting video documents a new painting technique developed by artists Søren Dahlgaard and Tully Moore.
First performed at Gertrude Contemporary Art Center in Melbourne during the opening of the annual studio group show, 2015.
A crowd of people gathered around the patch of grass to watch the gnomes getting painted. Children and adults alike were eager to suggest what was happening. Someone suggested the painting sticks were surely controlled by a computer from the upstairs studio.

The drawing below illustrates Søren and Tully sitting upstairs in a studio and painting the gnome in the gallery below with 6-meter long sticks with paint brushes attached. 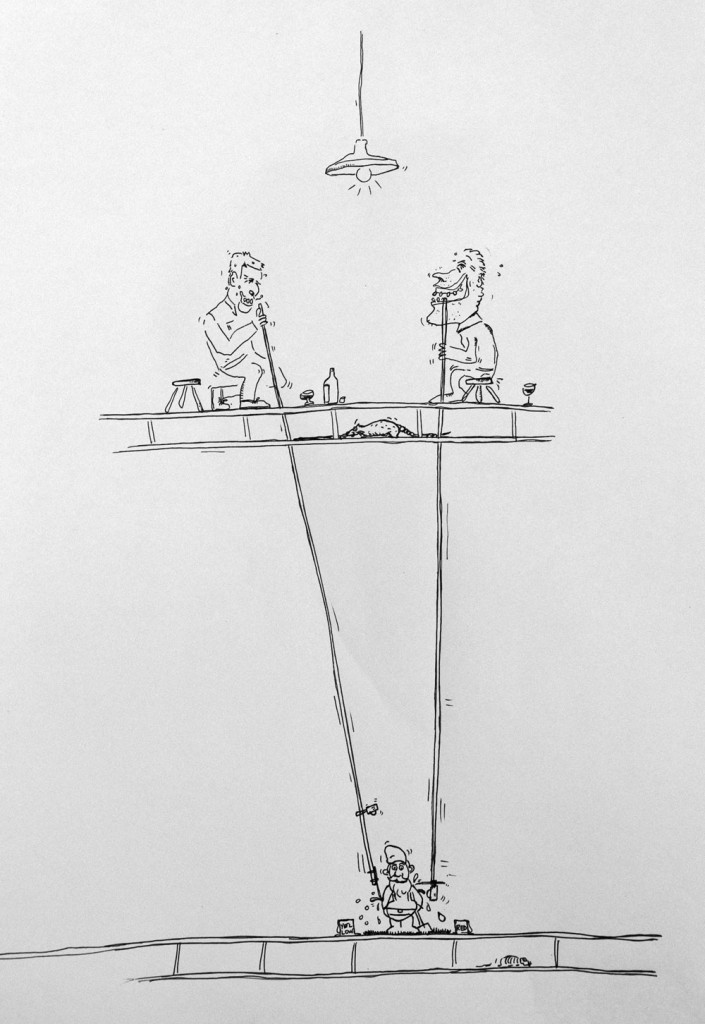 This video clip shows a random moment on a random day at the exhibition where people engage and paint the gnome.
Pay particular attention to the reactions of the older man – he seems to feel what is happening is very naughty and giggles and runs back and forth to tell his wife (who is painting the gnome) what is happening in the gallery space. It is very amusing to watch and it seems like he, and the other audience members had a good time with the gnome painting.

A second version of the Gnome Painting technique was shown at the Margaret Lawrence Gallery, Victorian College of Arts, Melbourne in 2016. This time, the 6-meter long paint brush sticks were installed horizontally through holes in the gallery wall leading into the main gallery space. The audience was invited to climb the tall chairs installed in the hallway behind the gallery wall and paint the gnome. A video feed from the main gallery space of the gnome placed on a garden totem was displayed on a screen on the wall and acted as the painter’s eyes.
With the aesthetics and dynamics similar to many video games, the Gnome painting technique connects the playfulness of video games to a new painting method by creating an analog game.