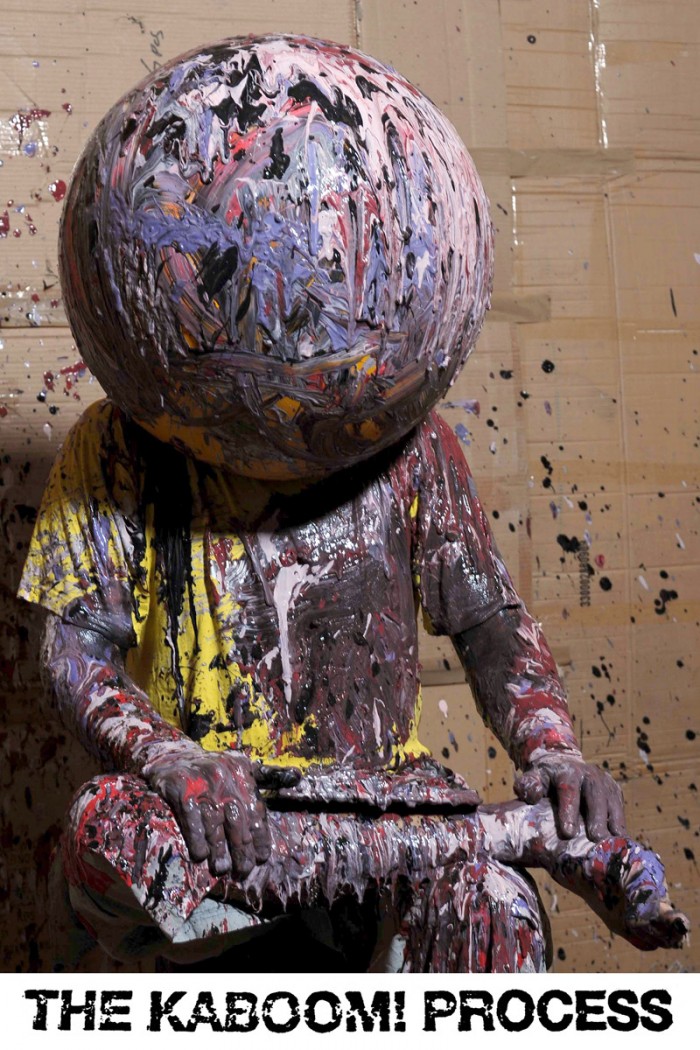 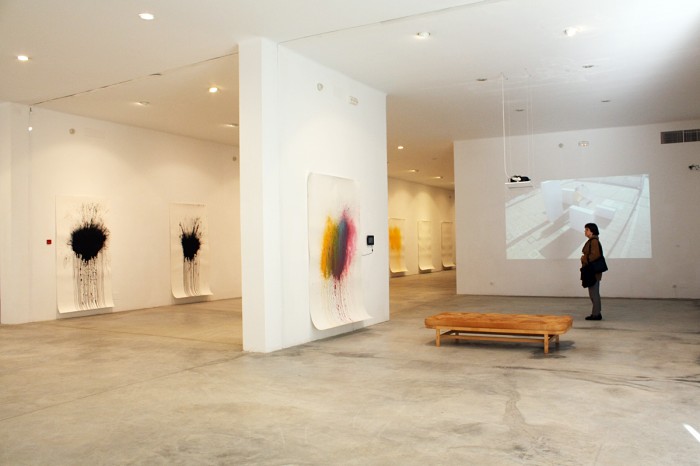 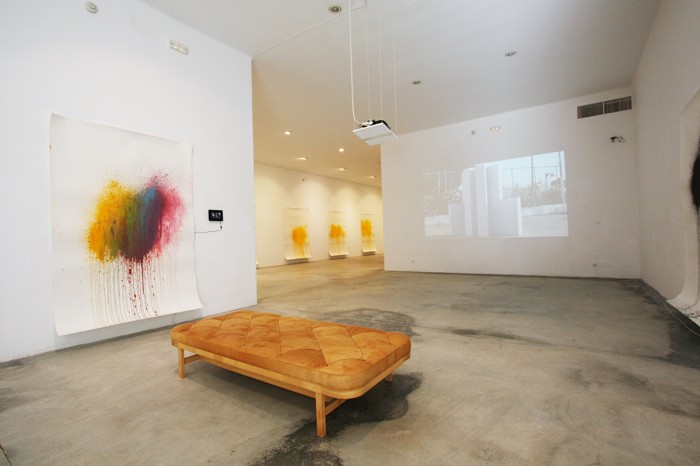 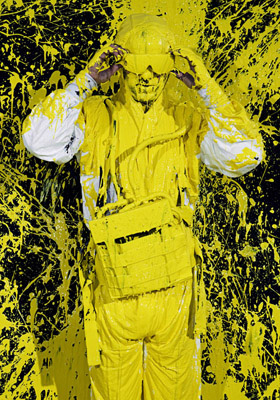 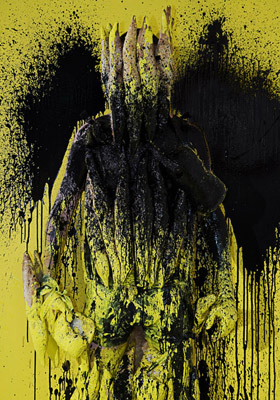 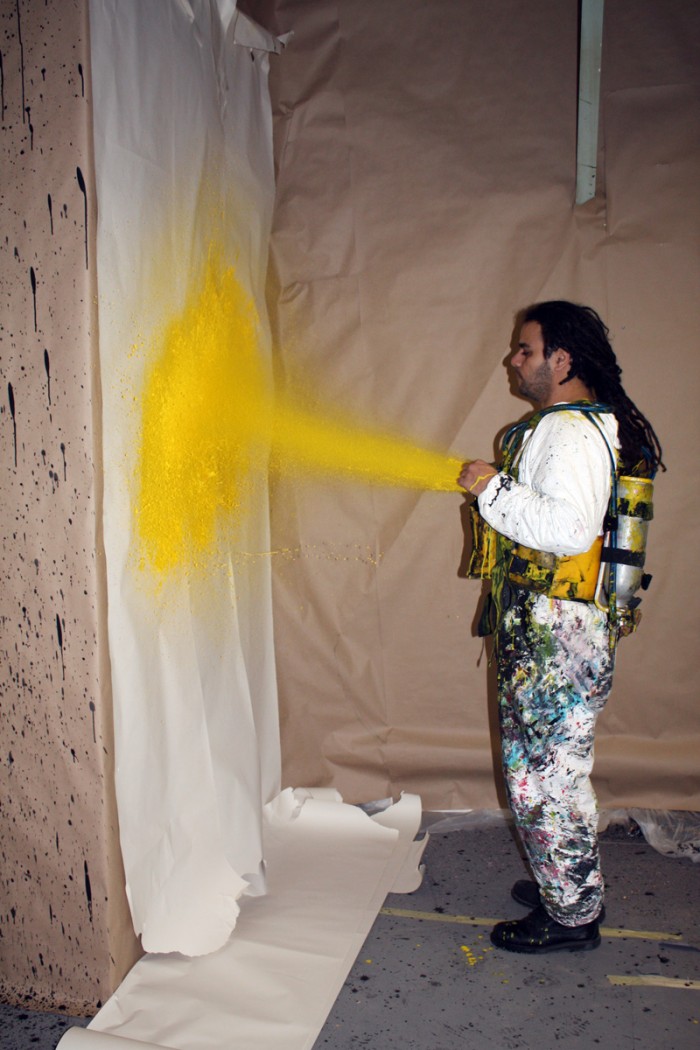 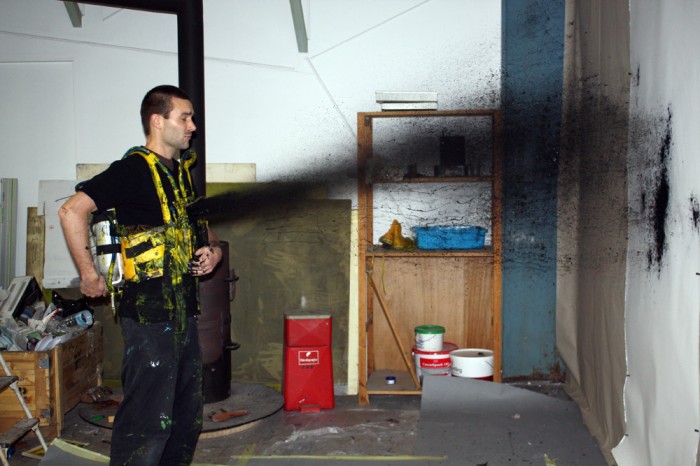 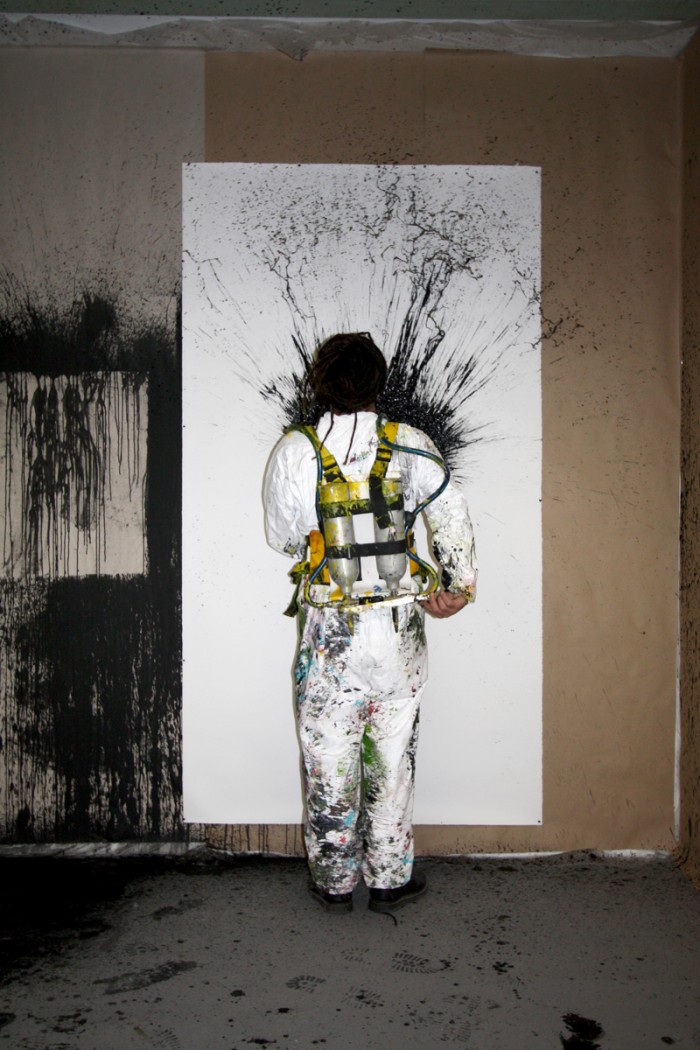 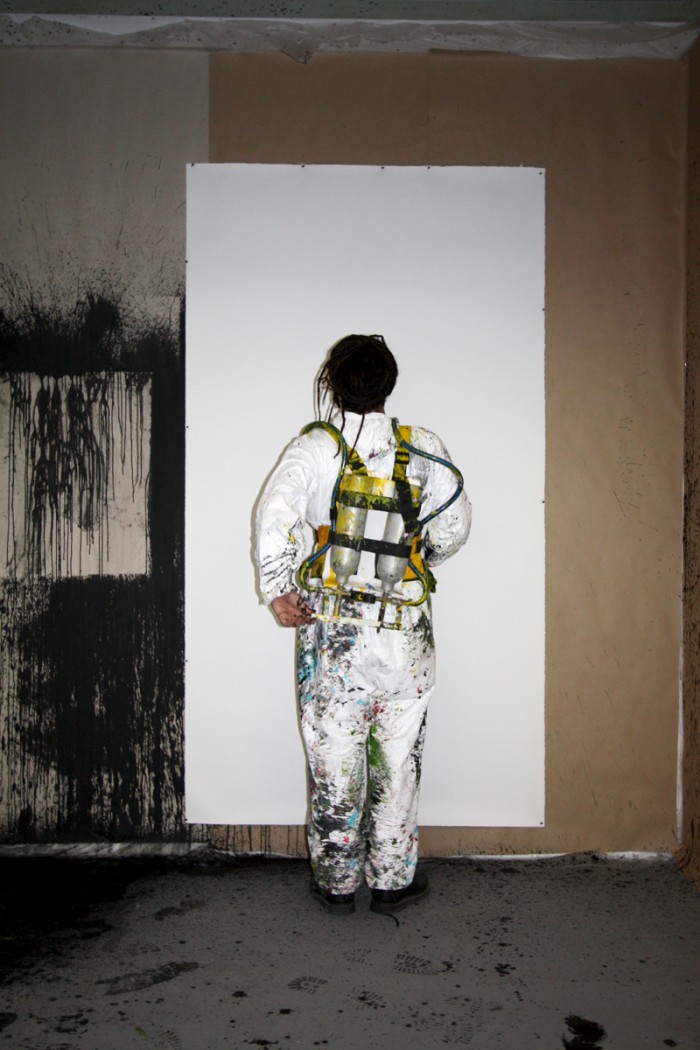 Their collaboration was born in 2007, at an international performance competition in Italy. Since then, they have been working together on various projects exhibited both in Denmark, Israel & Spain within the framework of THE KABOOM! Process.

The Kaboom! Process – The Slingshot Planting Technique from Meir Tati on Vimeo.

Documentary of The Slingshot Planting Technique in Holon Israel, November 2016.

By: Curator Dina Yakerson
Dahlgaard and Tati seek to challenge the everyday reality and absurdities of their home countries; Israel – the Middle Eastern war zone and Denmark – the quiet life behind the suburban hedge.
As the title of their collaboration insinuates, Dahlgaard and Tati create a new medium: “Explosion Painting”. In the exhibition at CCA Mallorca Spain 2012, they present ten of these works: ten video works, revealing the process itself, and ten paper works, portraying the final result. Each explosive painting is created with a custom made explosive belt, resembling the belt of a suicide bomber; the violent act transforms into a work of art and the process itself, which cannot be separated from the final piece, embodies the tradition of “action painting”. Their work examines heavily charged themes of political violence and art history by creating a light-footed hybrid- a “KABOOM!”; the word itself, a well known illustrated explosion, taken from comic books and cartoons, is now translated into a fresh artistic aesthetic; aiming to examine the boundaries between collective trauma and the making of art.

“Composition 1-8”, is a video work, created in the city of Holon, Israel. Here, the artists explore the tradition of modern sculpture by building various compositions out of mobile, wooden walls. This allegedly playful act aims to deconstruct the essence of the modernistic outdoor sculpture- its heavy material and undisputed site-specific permanence. Here, the sculptural compositions, made by Tati and Dahlgaard, visually resembling the Modern aesthetic- are opposite by definition; they are mobile and light, fleeting and ever changing, without leaving any permanent trace. Therefore, their work mergers the heavy Modern sculpture tradition, with the ideas of contemporary street- art. They create once more, a new crossbreed- a “sculpture graffiti”.

Meir Tati is artist-in-residence at CPH AIR – www.cphair.dk, from December 2008 until February 2009. The residency programme is run by Copenhagen Council and based at the Factory of Art and Design in Amager. Søren Dahlgaard is Meir Tati’s host during these two months and has planned a programme for the period.

Usually, it is a gallerist or curator who is the host for an artist from abroad but this is a collaborative project between two artists who are interested in each other’s creative process and methods. With very different cultural and personal backgrounds Søren Dahlgaard and Meir Tati seek to explore the differences and similarities between being in a war zone in Tel Aviv with bombs and violence around you and being behind the hedge in Denmark, where it is safe and calm, but also where various mental battles are fought.

THE KABOOM! PROCESS – portret painting from Meir Tati on Vimeo.

What is the idea behind THE KABOOM! PROCESS?

Søren: The reason for choosing the title THE KABOOM! PROCESS for our joint art project is that KABOOM is the word for a cartoon explosion. For us, KABOOM! is the painterly explosion from an explosion belt, and is about the process. One can say that the process, in reality, is the work of art, so that any media is connected with another media in the process, from the sketch drawing, the painting, the photo, the video and the performance. KABOOM! /the explosion is also masculine and macho and maybe there is too little of it in Danish art? It is also something very connected to war.

The KABOOM! Process studio work with the explosion belt 2008-09.

You are known as the Dough Warrior (Søren Dahlgaard), and for doing performances, in which you use well-known materials and symbols (dough and hedges), that speaks to our way of feeling and registering a new meaning in what we are experiencing. Are you the Dough Warrior in THE KABOOM! PROCESS?

At the Nikolaj Center for Contemporary Art, I performed as the Dough Warrior 11.12.08, see pictures here. The character is developed from my sculptural project using the absurd and easily perishable material; dough – combined with my action painting, which I began in 2001 at the Slade School of Art in London.
The Dough Warrior character can only paint with bread; such was the concept for me, as I had never painted before because my artistic background comes from the sculptural, Concept Art and staged photography. My first experience of painting can be compared with Matthew Barney’s Drawing Restraint series, where he tied himself to the floor and could hardly reach the paper, and therefore had a long stick in his hand to reach the paper on the wall. You make a set of rules for how you paint or do something. I have decided on a method, which is my method, but which is also different and weird and means that I cannot control the process. When I have bread in front of my eyes and am unable to see, and can hardly walk without the bread breaking or falling to the ground. It seems like a very bad idea; things go wrong because it is not perfect because it is an attempt. Maybe the attempt is the perfect work of art. Some of the elements of The Dough Warrior and the examinations he makes are also the starting point for my performance character in the collaboration with Tati.

Meir Tati brought his performance character the Yellowman and the ’explosion belt’, which is his new tool. Tatis Yellowman is a figure dressed in yellow clothes and shoes and with a yellow cape. He can’t see anything because he has a big yellow ball over his head. He, therefore, becomes very helpless and needs help in walking, and as the Dough Warrior, he doesn’t speak. Even they are helpless and anti-heroes are they in a way also action heroes. The reason for Tati to choose yellow, as the paint in his belt-explosions, is, that it is a colour of trauma for him. When he was little, he had a recurrent nightmare about a yellow moon. Furthermore, the colour yellow combined with black is connected to right-wing group in Israel. It is also a colour of signal and warning. Tati has worked with Yellowman for five years, but this anti-cartoon figure is fading out, as my Dough Warrior figure is also soon ready for a break.

Meir Tati continues to talk about his performances

Tati: A part of my works is about connections and borders between various groups of populations. In Israel, I was accused of being a political artist, and many asked me why my works of art were so political when I am not a political person in my daily life, where I, as an example, don’t vote for a particular political party. For me, it is naive to not be political, because how can you live in a place as intense as Tel Aviv and then go to the studio every day only to paint flowers? In my process, it is not possible.

KABOOM! Refers to the explosions of the cartoons, with the humor and crude characteristics surrounding heroes and the anti-hero. Have you developed your performance further?

Søren: Right now we are working intensely with the ’explosion belt’, as an instrument of painting. It looks like a suicide belt, but only filled with paint. As a starting point, it is political. The mere walking around and exploding paint on walls at Ground Zero of the Youth House (Jagtvej 69, which was demolished by the police in 2008) or on the hedges in the suburbs, but when we then do it on paper or canvas at the studio and record it on video, we are within the context of art as we are artists, and not out in some sort of demonstration. We don’t have any solutions for the conflict in the Middle East. However we want to make a statement, but as we are in the world of art we discuss it in a different way.

Another starting point for us both is the trauma, which we work with in both a concrete and in a symbolic way. The hedge that I use as a canvas in THE KABOOM! PROCESS is a reference to a trauma in Denmark, of course on a completely different level than to having bombs flying around you as in Israel. So the process, the method, and the tool are the elements that keep evolving. The tool in THE KABOOM! PROCESS is the explosion belt instead of the paintbrush, and the hedge is the canvas instead of a flat white canvas.

You do not define your art as political art?

Søren: Yes, among other things it has a political aspect, but if you want to change the world, one can probably find more effective means than producing art. I want to start some thought processes and some discussions. There is a social element in my works of art, and even more so in Tati’s.

Is it correct that THE KABOOM! PROCESS is one of many processes, from your start of exhibition and performance to visits at schools?

Søren: Yes, we will be making art at a school with a third-grade class. It is just part of involving people, as I did with the Dough Portraits at The National Museum in 2008, where people were part of the process and the work of art, and as Tati has done by being out in the streets with this type of performance. He has stood with his explosion belt on the same spot as someone stood with a suicide belt and let the bomb explosion take the lives of people. The belt and the explosion are the starting point of THE KABOOM! PROCESS, and it is mostly I speaking of art historical references to Action Painting, and avant-garde and in particular to the Japanese Gutai Group of the 1950s, who had groundbreaking ideas and with whose process of thought I should like to be associated. Not many do in Denmark or Israel, which leaves us feeling somewhat lonesome in that kind of Action Painting and performance.
THE KABOOM! Process will continue to produce projects. You can almost call it research in everything from painterly method to different ways of behavior and storytelling.

But it is also about art being easy to make, so easy that everybody can do it, or at least press the button of the belt. Our idea is: ’come and join us, press the button, put some dough over your head…’ And then there’s the cartoon humour in our art of explosion. We take it very seriously and are serious about our art, but we also have fun. We use humour because it is an excellent icebreaker and a way into the world of art for many people, who feel that art, does not communicate with them. In this way the impression of art becomes more straightforward and memorable. Another thing is that it is also very pleasing that the artwork has a broad appeal.

The collective element is also important. To be more than one person in the creation of an artwork that works is amazing because one can do so much more in that situation then when you develop ideas on your own.

So you will continue your collaboration?

Søren: Yes, as long as it works well and we have a good project. After our program in Denmark finishes in February 2009, we will continue with the development of a performance and show for BLURR 7 – The Seventh International Performance Art Biennale at the Center for Contemporary Art in Tel Aviv, Israel in November 2009.